Sheikh Isa Qassim Trial In Absentia Postponed to ​21 May 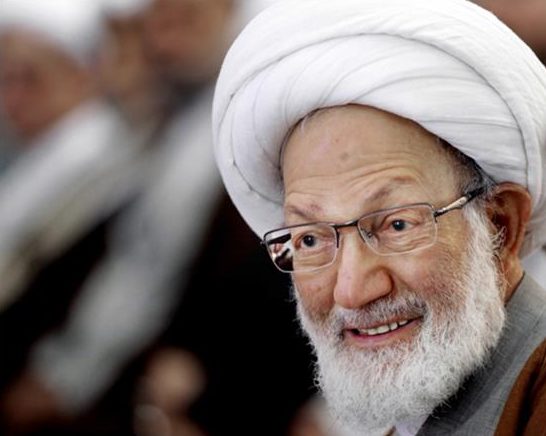 The forth high criminal court today postponed the trial of Sheikh Isa Qassim, the most senior Shia cleric in the country, to 21 May. Sheikh Qassim, who was stripped of citizenship and rendered stateless on 20 June 2016, is being treated as an illegal resident in his home country, and has been tried in absentia.

Sayed Ahmed Alwadaei, Director of Advocacy, Bahrain Institute for Rights and Democracy: “Over the past year Bahrain has silenced all political opposition, all human rights defenders, and now they are coming after the most senior religious figure in the country”

“This politics of dictatorship creates instability and fosters extremism, both in Bahrain and in the region, and must be condemned by Bahrain’s allies in London and Washington.”

BIRD alongside other NGOs wrote to the United Kingdom calling for action ahead of the trial. The trial of Sheikh Isa Qassim, who holds the rank of Ayatollah and who was elected to the assembly which wrote Bahrain’s 1972 constitution, has enflamed feelings of disenfranchisement within Bahrain’s Shia community and led to a deeper repression of human rights in the country.

The Government of Bahrain’s prosecution charged Sheikh Qassim with money laundering. This relates to his role in the collection and redistribution of khums, an obligatory religious donation for Shia Muslims which is spent for religious and charitable purposes. Sheikh Qassim never received a summons, and his office was searched without warrant.

“Khums is a religious obligation for all Shia and is used to assist the community’s most vulnerable, including orphans,” says human rights defender, religious freedoms campaigner, and religious scholar Sheikh Maytham al-Salman. “In the Shia community, khums represents a collective effort to assist those who are less fortunate. It seeks to eliminate poverty and build harmony within society.”

In legal documents seen by BIRD, the Public Prosecution states that, “He directed them [his followers] to break the law and to turn against their country and its fortunes,” and describes him as, “one who allowed himself to follow the law of the jungle.” The Prosecution belittle Shia who look to Sheikh Qassim for guidance, stating: “They never asked whether he was an honest man or just an imposter. Their tongues were knotted so they didn’t ask, their eyes were hypnotized so they didn’t see, and they lacked wisdom so they didn’t think.”

BIRD, ADHRB, ARTICLE 19, the Bahrain Interfaith and other NGOs wrote to the United Kingdom, United States, United Nations and European Union ahead of the trial. In their 4 May letter, they state that the prosecution’s language ”encourages religious intolerance.”

Husain Abdulla, Executive Director, Americans for Democracy & Human Rights in Bahrain (ADHRB): “Just last week President Trump signed an executive order to ‘vigorously promote religious liberty’ at home, all the while he’s deepening support for serial violators of religious freedom abroad, like Bahrain and Saudi Arabia. As noted by the United States Commission on International Religious Freedom, this is only one of the most egregious abuses in a systematic campaign of discrimination against the Bahraini Shia community. The Trump administration must loudly condemn the continued prosecution of Sheikh Isa Qassim and pressure the Bahraini authorities to eliminate all forms of religious discrimination. The first step is to immediately drop the charges against Sheikh Isa Qassim.”

On 20 June 2016, Sheikh Isa Qassim was stripped of his citizenship, and his home town of Duraz has been a centre of rising protests to the government’s decision to denaturalize Sheikh Qassim. Since June 2016, over 80 Shia clerics have been questioned by authorities for protesting, with nine currently serving prison sentences in relation to their expression and assembly. Additionally, no Friday prayers have been barred from the Imam Sadiq mosque, the largest Shia mosque in Bahrain, which Sheikh Qassim preached at.

Five UN Special Rapporteurs last year expressed concern over the systematic persecution and repression of Bahrain’s Shia. Sheikh Qassim’s prosecution deepens that persecution. The United States Commission on International Religious Freedoms’ (USCIRF) latest annual report categorises Bahrain as a Tier 2 country, which is defined as one “in which the violations engaged in or tolerated by the government are serious and characterized by at least one of the elements of the ‘systematic, ongoing, and egregious’ CPC [Countries of Particular Concern] standard.” USCIRF found a deterioration in the religious freedoms of Bahrain’s Shia, and highlights Sheikh Qassim’s nationality revocation and prosecution as a key, negative development.

The reprisals against Sheikh Qassim has led to further grave violations: On 26 January 2017, masked, plainclothes officers shot live ammunition against the peaceful sit-in outside his home in Duraz, fatally wounding 18-year-old Mustafa Hamdan, who died in March. No government entity has acknowledged responsibility for this attack nor have any independent and impartial investigations occurred to date.