Bahrain Interfaith congratulates Zeid bin Raad after his appointment as the president of the IPI.. and Sheikh Al Salman: “Zeid does not compromise on human rights” 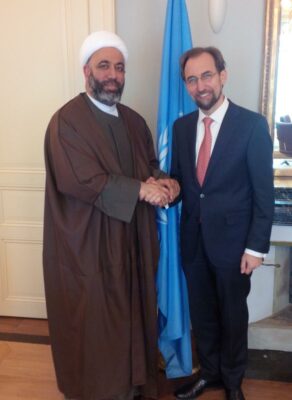 Bahrain Interfaith congratulates Prince Zaid bin Raad Al Hussein, the former United National High Commissioner on Human Rights, on the occasion of his appointment to the position of President and Executive Director of the Institute for International Peace (IPI), as announced on Friday, March 12, 2021. Zeid will be the fifth executive director of the institute since its inauguration in 1970, in partnership with the United Nations.

The institute assumes important roles in resolving crises, encouraging diplomatic initiatives, promoting peace and sustainable development. The institute has a branch in Bahrain covering the Middle East and North Africa region headed by Najeeb Fraiji. It is expected that Prince Raad will assume his new responsibilities at the end of March 2021.

Sheikh Maytham Al-Salman expressed his “sincere” congratulations to Prince Zaid bin Raad, and Sheikh Al-Salman expected that the institute would take “active and progressive roles in the era of Zaid in achieving peace and finding just settlements in countries suffering from wars and crises.”

Al-Salman explained that he worked with Prince Zeid on a number of initiatives related to human rights, including the Civil Coalition to Combat Hatred in the Middle East, adding, “Zeid deserves respect for his ethical and moral role in supporting peace and human rights, he is person who does not compromise on human rights and social justice, and possesses all the competencies required for success in peace building and conflict resolution“.

Sheikh Al-Salman added, “It is hoped that the institute, headed by Prince Zeid, will play a vital role in encouraging initiatives for national reconciliation and resolving political crises in the world”.

International human rights and peace building organizations and figures expressed their good wishes and hopes for Zeid’s success in his new mission after the announcement of Prince Zeid’s appointment as the president of the International Peace Institute, especially with Zaid’s “unique mix” of high-level diplomatic experience and first-class expertise in the field of dealing with peace, security and complex crises issues.”.

Zeid is widely respected all over the world for his “integrity, impartiality and commitment to human rights,” which he reflected throughout his work as the High Commissioner for Human Rights at the United Nations.