Sheikh Al-Salman: The Pope’s visiting to Iraq and the meeting with Sayed Al Sistani..”Great Step” 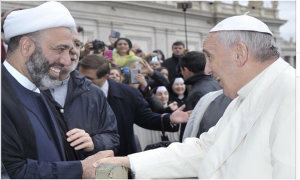 In a brief statement, Sheikh Al Salman said, “The Pope’s insistence on visiting Iraq at this sensitive period, and the anticipated meeting with his eminence, Sayyid al-Sistani, represent a great step on the path towards promoting dialogue and religious tolerance, and to provide a practical example of the role that religious leaders can play in bringing peace. It is also an opportunity to overcome barriers and challenges that stand in the way of peace and reconciliation”.

Sheikh Al Salman referred to the event that was held in the Lebanese capital Beirut in December 2019, organized by the “Geneva Call” and the European Union, in which the Bahrain Interfaith was an active participant at all levels. The event highlighted the anticipated role of “religious leaders in times of conflict”. A final statement affirmed the importance of the “directives” issued by “religious leaders” “to provide the necessary protection for civilians and to preserve the dignity of all human beings safeguarding the right to life.”

Sheikh Al Salman renewed his call to “empower religious and community leaders to confront the growing phenomenon of extremism and terrorism in the region.” Religious leaders hold a responsibility of countering Revenge and hate .” He said.

Sheikh Al Salman believed that the Pope’s visit to Iraq, and the upcoming meeting with the Ayatollah , Sistani, “spurs more efforts in Bahrain to take serious initiatives to defuse tensions, bring the distances between the components of society closer, and creating sold grounds to organize meetings between the leaders of these components to agree on basic principles.

Bahrain he said “needs a peace and just vision that protects the homeland and citizens from the effects of crises, and achieves lasting security and stability for all. “