Sayed Abdullah Al-Ghuraifi : Whoever Sows Extremism, Violence And Terrorism is a Traitor to His Religion And Nation 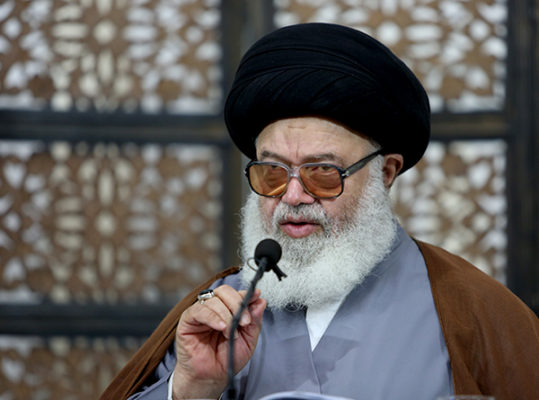 In a speech marking the birth of Imam Al-Hassan bin Ali bin Abi Talib on Friday evening, May 8, 2020. Al-Ghuraifi said that “the value of politics” lies in its ability to serve human beings and protect them” in line with the goal of enabling, cooperation, collaboration and solidarity between mankind”, stressing the need to serve all people and the nation.

Al-Ghuraifi called for the necessity of employing all capabilities in the service of human beings and meeting “the needs of the nation”, pointing in this context to “preserving the nation’s unity, security, strength, pride and dignity”.

Al-Ghuraifi stated that whoever works to “sow disputes and conflicts that break up the unity of the nation” is “a traitor to his religion and nation.”

Furthermore, Al-Ghuraifi added, ” whoever sows terror, extremism, violence and terrorism is a traitor to his religion and nation”, as well as whoever weakens “the strength of the nation and tampers with its dignity.”

Based on the commandments of Imam Al-Hassan, Al-Ghuraifi highlighted on mechanisms of a positive relationship between the ruler and the ruled, and pointed out to the need for mutual “sincerity and understanding” between them, through the ruler’s policies in protecting the rights of the ruled.

Al-Ghuraifi added on the need to establish a relationship between the ruled and the ruler based on the exchange of sincerity with sincerity and “love with love and loyalty with loyalty”, noting that if the ruler is otherwise, the nation should restrict to peacefully advising the ruler, and “raise its concerns with rationality and wisdom especially in their demands for their rights. ”Al-Ghuraifi emphasized that it is unacceptable for the“ nation to resort to any form of ”violence and extremism, and actions that threaten the wellbeing of homelands and destabilize the lives of people.