Sheikh Al-Salman: The government must assume its responsibility of protecting cultural heritage following repeated sabotages of the Sa’saa bin Suhan Mosque and shrine 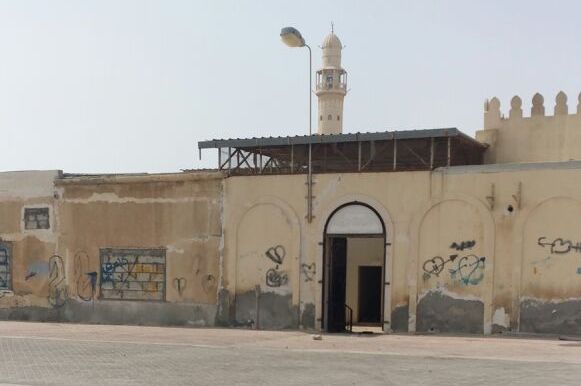 Renewed sabotages and encroachments took place on the well-known shrine and mosque in Bahrain attributed to the companion of the prophet (Sahabi) Sa’saa bin Suhan, considered to be one of the oldest Islamic monuments in Bahrain. In the past few days recently-taken photos have spread which show the shrine – located in the village of Askar,southeast of the coast – from within, manifesting the damage and tampering that its property has been inflicted with.

Sheikh Maytham Al-Salman, Director of Bahrain Interfaith, clarified that “the aforementioned mosque has been subjected to repeated attacks in history, except, they took on a new pace following the sabotage that it was subjected to after the events of 2011”, and he put that in the circle of “insulting religion, national history, and neglecting the cultural and humanist heritage in Bahrain”.

Sheikh Al-Salman stated that what the Sa’saa mosque and shrine is being exposed to calls upon the concerned authorities in the government to “assume their responsibility in preserving the sanctities of Shiite Muslims in Bahrain, and protecting the cultural heritage of the country, in accordance with relevant international commitments”.

The Supreme Council for Islamic Affairs (a governmental body) has promised to repair the damage to the shrine and mosque after the sabotage it was exposed to at that time, however official authorities have not taken measures that prevent the recurrence of aggression and vandalism on this archaeological site yet, especially in light of the existence of governmental trends that involve acts of discrimination between places of worship in the country.

Sheikh Al-Salman called on the Ja’fari Endowments Council (governmental body) to assume its responsibility as well, given that the Sa’saa mosque and shrine is under its direct authority and supervision. On March 2012, the mosque and shrine was attacked and the Ja’fari Endowments Council issued a statement denouncing the attack and describing it as a wrongful aggression, calling for “providing security and full care for such landmarks which represent sites that reflect the religious and historic dimension of the Kingdom of Bahrain”. The Supreme Council for Islamic Affairs (a governmental body) has promised to repair the damages that the mosque and shrine was inflicted with following the sabotage that it was subjected to back then, however, official bodies have not taken measures that would prevent the recurrence of attacks and sabotage on this archeological site until this day, especially in light of governmental trends that involve practicing discrimination between places of worship in the country.

It is noteworthy that Bahrain Interfaith delivered a letter to UNESCO in Paris on May 21, 2013, about the neglect and sabotage that the mosque was being subjected to, in which he stressed on [the need] for the government of Bahrain to play its role in preserving historical and archeological sites in accordance with UNESCO agreements.

It is reported that Sa’saa, the companion, died and was buried in Bahrain on the 60th day of the Prophet’s Immigration (679 AD), and that a mosque was built over his tomb, which became one of the well-known shrines for the Shiites in the country. Many endowment documents exist in which the Sa’saa mosque in the village of Askar is mentioned, where ancient inhabitants in Bahrain agree on the presence of the grave of Sa’saa there, and on the presence of an inherited interest in it, which reinforces the historical narration conveyed by historians and narrators about the death of Sa’saa bin Suhan in Bahrain.