ROME — A summit in Rome between Shi’ite Muslim and Catholic leaders on Tuesday produced a strong condemnation of terrorist acts by radical Islamic groups such as Boko Haram in Nigeria and ISIS in Iraq and Syria.

“Religious leaders who legitimize violence are neither religious, nor are they being leaders,” said Maytham Al-Salman, head of an interfaith center in Bahrain. “Those who promote diversity, acceptance of others, love and mercy, are the true religious leaders.”

Al-Salman said that Islam has been hijacked both by non-democratic regimes that utilize scripture to legitimize human rights violations, and by hardline extremist groups to justify terrorism.

The Rome summit was organized by the Community of Sant’Egidio, a Catholic movement that specializes in conflict resolution and ecumenical and inter-religious dialogue, as well as the Iraq-based Al-Khoei Institute. Its purpose was to consider the “responsibility of the faithful in a plural world towards peace.”

Al-Salam called for religious leaders and organizations to take a clear stance against hate speech in social media, public commentary, and other platforms. Otherwise, he warned, steps to stop terrorism will fail.

“We need to implement legislative measures that deal with the growth of hatred, rather than the growth of violence and terrorism,” Al-Salam said. “Unless we deal with hatred, we’ll never reach the right strategy for containing terrorism.”

He proposed pressuring governments to drop restrictions on religious freedom, such as law in the Persian Gulf that deprive Catholic faithful of the right to build and to use churches.

Hashim Al-Salman, rector of the theological seminary of Al-Hasa in Saudi Arabia, proposed an international day to celebrate the Prophet Abraham, who is honored by the three traditional monotheistic religions (Judaism, Islam, and Christianity), as a sign of interreligious understanding.

Jawad Al-Khoei, general secretary of the international Al-Khoei Institute, called for a consolidation of the common ground among Catholics and Shi’a Islam.

“There’s a common vision between Shi’ite and Catholics of peacefully living together,” he said.

For this dialogue to be successful, he said, it must be inclusive, not restricted to intellectuals.

“We need to plant this seed in society, through the arts, sports, politics culture,” al-Khoei said.

“Plurality comes from the origins of human life,” he said, quoting the Quran. “Allah said there’s no difference between people, and that a nation cannot impose itself over another nation. Allah said ‘respect each other, honor the sons of Adam.’” 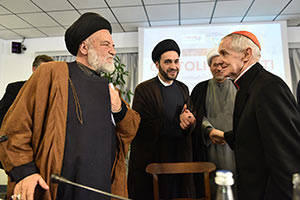 Italian Catholic layman and historian Andrea Riccardi, the founder of Sant’Egidio, said that some men and women today who feel disoriented are attracted to fanaticism.

“In a globalized world, people can’t bear a rootless existence and take refuge in this perversion of religion,” he said.

“Religious leaders who legitimize violence are neither religious, nor are they being leaders.”— Maytham Al-Salman, head of an interfaith center in Bahrain

Talking about the persecution and “moment of trial” faced by Christians and Shi’ites alike today in Pakistan, Iraq, and Nigeria, Riccardi said that “we can’t stand by idly without any social responsibility.”

French Cardinal Jean Louis Tauran, president of the Vatican’s Pontifical Council for Interreligious Dialogue, said that for Christians, Muslims, and other believers, God is a source of good that implies peace.

Tauran condemned what he called an “unscrupulous instrumentalization” of humanity’s innate religious sense.

“Is there a scourge worse than war?” he asked. “I think of the victims of the conflict in Syria, with 10,000 kids being murdered in four years, 4 million refugees, 7 [million] internally displaced, and over 70 percent of the society living in poverty.”

“It makes us wonder, where does violence come from?” he asked, suggesting the causes are not only injustice, the struggle for natural resources, and the arms trade, but also incitements to violence by religious leaders.

“I think of Pakistan, where people are burned on charges of blasphemy!” Tauran said.

He called for religious rhetoric to promote social cohesion.

“We have an obligation to promote peace, especially in times of crisis like the present one,” Tauran said, asking, “How much pain arises from the religious schools of some countries that become a breeding ground for extremism?”

Tauran also said that the Pontifical Council for Interreligious Dialogue is studying a proposal made by Shi’ites to establish a permanent dialogue between the two religions.

Al-Salman called for religious leaders to join forces with the United Nations, UNESCO, and the International Human Rights Committee to adopt strategies to stand against the growth of radical violence, especially within the Middle East.

“When Boko Haram demolishes a church in Nigeria, or hardliners [attack] a Shi’a Shrine in Iraq, there should be a collaborative approach toward these acts of terrorism,” he said.