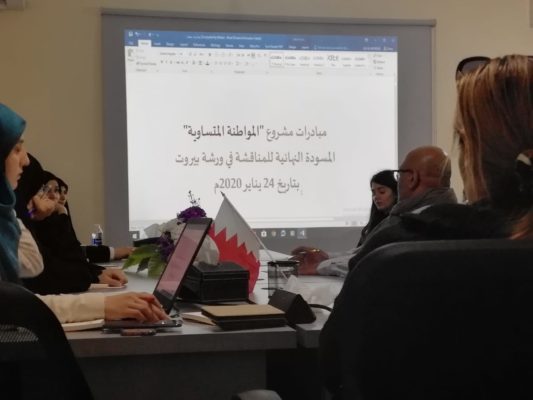 On Friday, January 24, 2020, Bahrain Interfaith held a workshop in Beirut, in cooperation with the Bahrain Center for Human Rights, to discuss initiatives for promoting equal citizenship, in the presence of politicians, legal researchers, and Bahraini and Lebanese journalists.

President of Bahrain Interfaith, Sheikh Maitham Al-Salman, launched the opening of the workshop, by presenting the projects that the center had accomplished in this field.

“A glossary of terms and concepts on homeland and citizenship” was presented and discussed by legal professionals, with copies distributed to all attendees. Sheikh Al-Salman then discussed the importance of equal citizenship and its role in resolving the crisis in Bahrain. He then paved the way for the submission of pre-prepared initiatives for discussion, amendment, and development.

Following the introduction and preface, the session continued with the moderation of president of Bahrain Centre for Human Rights, Nedal Al-Salman, who in turn stressed on the importance of activating these initiatives, and presented them for launching the discussion.

The presented initiatives covered all levels, varying between political, legal, educational, media, artistic, human rights, and other topics that enhance the concept of citizenship.

Participants interacted with the topics in a rich and diverse manner, providing multiple opinions. Everyone shared his/her opinion in the discussion about the legal violations committed in citizenship related matters, the state’s obligations towards them, and citizens’ responsibilities.

This workshop comes in the context of a number of programs and activities that had been held by the two centers, and is one of its central projects among and activities.

Emphasis was made on the need to link the concepts provided with the concept of citizenship, with a discussion following on the ways in which citizens could be positively effective within their geographical, tribal, or social scopes, while particularly aiming at achieving the following: