On the anniversary of the King’s call for National Dialogue … Bahrain Interfaith : An opportunity to learn from past experiences and create firm grounds to re-launch “a meaningful and serious National Dialogue Process” 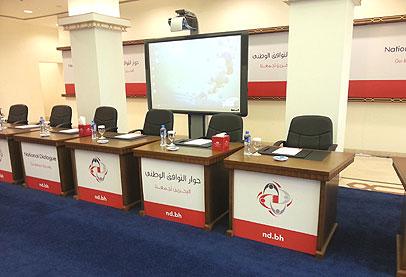 On January 22nd, 2013, the King of Bahrain renewed his invitation to political organizations to organize a third round for national dialogue which was launched in July 2011, after several rounds were interrupted due to a divergence in views. Bahrain Interfaith considers that this anniversary represents “an opportunity for everyone to review the dialogue rounds that the country had witnessed at that time, and to build on the lessons learned from them in order to correct the path, and to create firm grounds to launch a productive dialogue between the different parties.”

The Ministry of Justice had published a statement at that time which clarified that the Minister had sent – upon the request of the King of Bahrain – invitations to “the representatives of the political organizations and independent factions in the political community in Bahrain to complete the national consensus dialogue in the political axis.” It was noteworthy that the aforementioned statement stressed that “the door to meaningful and serious national dialogue has not and will not be closed, as long as it is in the interest of the country and citizens.”

Ever since that invitation, Bahrain has not witnessed invitations for dialogue of such importance, despite the fact that the country has been witnessing escalating waves of political, security, and economic turmoil that intensified the divergence in views between the two sides in the crisis. As a result, the efforts exerted to organize rounds for national dialogue were not productive, and thus further attempts to promote an appropriate atmosphere for national reconciliation that would meet the aspirations of all spectrums of society decreased.

In this occasion Bahrain Interfaith (BI), calls on the government of Bahrain to relaunch an invitation for a “meaningful and serious” national dialogue, as the statement of the Ministry of Justice declared at that time. The center considers that the “local and regional conditions encourage taking courageous national initiatives now more than ever, and stresses on the necessity of learning from past experiences in dialogue between the parties of the political crisis, assuring that the challenges faced in those experiences should not be an obstacle to “finding creative and positive solutions to re-launch national dialogue that would pave the way for a solid and satisfactory political settlement for all parties”.