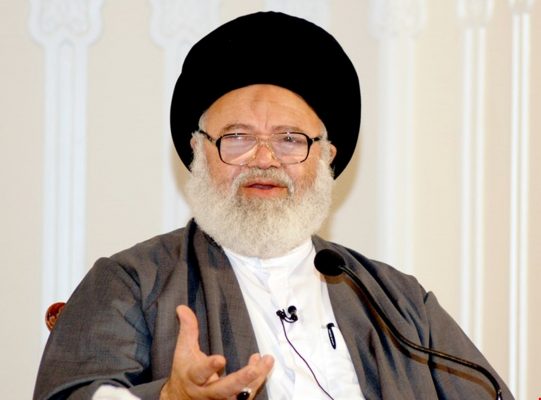 Sayed Abdullah Al-Ghuraifi (born in 1939), established his influential presence in Bahrain through his religious symbolism, social status, his openness, and his receptive personnel characteristics. Sayed Abdullah without any doubt has well positioned himself as an advocate for dialogue and reconciliation in Bahrain after utilizing for than 70 lectures to call for dialogue and create national momentum towards reconciliation. Sayed Abdullah has taken a clearer position in his calls to counter hate speech and violent extremism in Bahrain, and elsewhere.

Al-Ghuraifi reminded all parties involved in the political crisis in Bahrain that dialogue is the only safe way to resolve differences and reach national consensus on disputed issues . Dialogue, in his opinion, is not merely a platform to create space for debate and deal with controversial disputes . Dialogue in the understanding of Al Ghuraifi is a necessary path in life and a cultural, social, and political choice to deal with differences in a civilized manner. Al-Ghuraifi relentlessly advocated for dialogue and utilized his speeches to enable his community to re-envision dialogue in a more progressive and constructive context. In one of his speeches in the last quarter of 2019 , he highlighted the importance of dialogue driven by Quran verses that mentioned that dialogue took place between God and the Satan. He emphasized that dialogue was God’s choice in communicating with the Satan and stressed on the Importance of rejecting violence and extremism as a choice in dealing with differences. Sayed Abdullah stressed that: There is nothing that should prevent dialogue from taking place, because dialogue – in depth – in an internal encounter, a spiritual endeavor, and a thoughtful exploration to discover the ideas, visions and understandings of those who have indifferent opinions. He believes that dialogue is a necessity in ensuring peace, stability and the well being of nations.

Al-Ghuraifi was keen to socially and politically position himself in a seat that enables him to address the Government and the opposition at the same time, and advice them on the core principles required to enact a dialogue leading to convergence and understanding. He believed that this requires counter narratives to hatred and biased positions , and that moderation and rationality is the framework that creates dialogue, and objectivity and fairness is the basis that guarantees the continuation of dialogue.
He has not hesitated to present “initiatives” and succeeded in opening the doors of hope towards reconciliation.

Al Ghuraifi was positively receptive to criticisms from the Government and his community in 2019, and continued his relentless calls for dialogue and reconciliation.

Furthermore, Al Ghuraifi welcomed people from all walks of life in his Majlis (council) including officials and opposition figures. The space he provided created an opportunity for all sides to exchange opinions in a welcoming environment.
It is unfortunate that, the Government surprised thousands of Bahrainis, by targeting Sayed Abdullah for his calls for dialogue, and launched smear campaigns against him In official newspapers. However, Al Ghuraifi continues to advocate for dialogue, peace and reconciliation regardless of the forecasted consequences, due to his belief that Bahrain deserves peace, stability and overcoming the difficulties faced by all since 2011.

Based on the above, Bahrain Interfaith believes that Sayed Abdullah Al Ghuraifi deserves to be rewarded as the “Advocate for Dialogue 2019 ” for his clear positions on national dialogue and reconciliation in 2019.