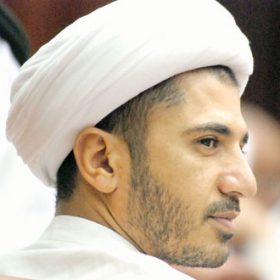 Sheikh Ali Salman (born October 30, 1965) is a moderate Bahraini political leader who possesses the competence of maneuvering through storms and facing challenges without losing his calmness. Throughout his political life he has presented a notable model of leadership in his ability to rectify strategies that fail in harvesting goals , and anticipate to face challenges with a high level of resilience to achieve his objectives . Sheikh Ali Salman may not possess all the competencies required by modern politicians, but he is surely one of the most prominent and influential political figure who knows how to mobilize others around ideas within his community. He has succeeded in the past in winning and sustaining understandings that could put ideas into practical use and could potentially generate positive results through “intra-diplomacy” and “inter-diplomacy” skills.

Sheikh Ali’s Maneuvering skills, his ability to change tactics, his openness towards benefiting from feedbacks and learning from previous mistakes, his experience in creating consensus within his community, his flexibility towards political mechanisms and ability to adjust and adapt to changing environments, surely places him in a position to play a role in the long awaited national reconciliation process In Bahrain.

Sheikh Ali Salman, was able to preserve his “political glow” since the uprising of the 1990s. He managed to not only preserve his glow, but utilized the opportunity in building his political and social competencies steadily over two decades. One of the main competencies that characterize his personality today is his ability to politically manage his position in an unstable environment. It is arguable to state that Sheikh Ali gained his competence in managing political positions within his circles from the nineties for he was challenged with a social and political environment lavished with multi-directional clashes and differences. Sheikh Ali found it difficult, but managed to maneuver through sloppy challenges, with minimal losses.

Today he relied on two strengths: the first is his present political aura inherited from the nineties, and the second is his competence in “political flexibility” and “social adaptation”.

Sheikh Ali seems to know that he cannot satisfy everyone in a political struggle. Although he is a leader within the opposition, he presents a model of flexibility in dealing with pressures from both sides of the crisis. Political leaders frequently rest under the stress of pressures, from the streets and from the Government, and eventually many of them head towards gray circles, and take vague positions. Sheikh Ali, was able to leverage through both positions utilizing his maneuvering tactics and his flexible and adaptive approach in facing political storms and challenges.

It might not be possible to uncover his competence in “political flexibility and adaptability” through studying his speeches . A thorough study of his private talks with Government official including talks with the King and the Crown Prince in between the years 2001 and 2014 would uncover his competence in positively managing differences.
Sheikh Ali Salman went through the experience of meetings and talks with officials with an intention to solve differences and reach to a consensus on a realistic approach to solve crisis.

His talks with Government officials were not necessarily fruitful but he was persistent in tackling challenges through dialogue and negotiations.

Surprisingly, Sheikh Ali ended up in prison after years of fighting to safeguard Bahrain from slipping into violence and political chaos and more than a decade of talks with Senior Government officials.

Sheikh Ali Salman’s main concern before imprisonment was producing a recipe for national reconciliation that satisfies the ruler and the ruled. He is without any doubt still interested in producing that recipe within his prison cell.