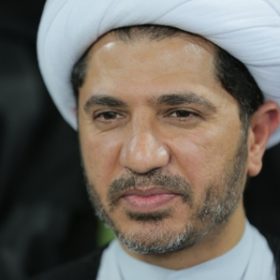 Bahrain Interfaith called for the release of the opposition leader, Sheikh Ali Salman, who was arrested five years ago on December 28, 2014. The Center stressed that Sheikh Salman should be enabled to hold talks with the Government, and to coordinate with political parties to pave the way forward to a national reconciliation process that is sought by the majority of Bahrainis.

A court in Bahrain sentenced Sheikh Ali Salman to 4 years in prison on charges related to his political opinions. He was also sentenced to life imprisonment in another trial on charges related to a telephone call that took place between him and the former Qatari Prime Minister Sheikh Hamad bin Jassim, which discussed the consequences of the crisis in 2011 and reconciliation attempts.

(BI) noted that United Nations experts confirmed that both trials to which Sheikh Ali Salman was subjected to “violate the international standards for fair trials“, and that Sheikh Ali is ” a prisoner of conscience with distinction.” The center added that Sheikh Ali Salman “exercised his rights in expressing the need in Bahrain for sustainable and comprehensive reforms that guarantee equal citizenship for all.”

Sheikh Maytham Al-Salman, Director of the Bahrain Interfaith (BI), stated that “the Government should release Sheikh Ali Salman, in order for him to play a positive role in building national consensus, and paving the way forward for a reconciliation process that meets the aspirations of all citizens.”
Sheikh Maytham Al-Salman stressed that Bahrain “desperately needs to heal the wounds of the past, and adopt accelerated steps to defuse tensions”.

On the occasion of the fifth anniversary of the arrest of Sheikh Ali Salman, Bahrain Interfaith published a book called “Struggle for Equal Citizenship discussing Sheikh Ali Salman’s Talks with State Officials in Bahrain,” The book reveals Sheikh Ali’s view on the circumstances surrounding those talks and the challenges that led to their failure in achieving the desired results.