Bahrain Interfaith in a Statement at the Global Refugee Forum: “The Bahraini Diaspora” Awaits Solutions From the Govt. of Bahrain and The World 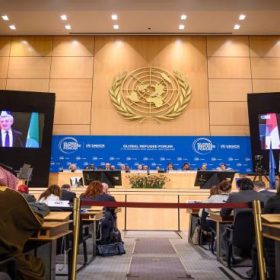 Bahrain Interfaith addressed the States participating at the First Global Refugee Forum, which was held at the Palace of Nations in Geneva from 17 to 18 December 2019 on the growth of Bahraini Refugees seeking asylum around the world. The forum discussed possible and effective measures to relieve pressure on countries hosting refugees, and find solutions to those displaced by wars and persecution.

In its statement, the Center highlighted the difficulties faced by Bahraini refugees around the world, and brought attention to an alarming phenomenon; a “Bahraini diaspora“. (BI ) pointed out to the negative consequences resulting from that, on social, political and civil levels.

The Global Refugee Forum is the first of its kind, with the participation of a number of States.

In its statement in the forum, the center brought attention to the numbers of Bahraini refugees in various countries around the world, and clarified that the numbers of refugees has escalated after the events of February 14, 2011 after hundreds of Bahrainis were forced to flee Bahrain, for fear of being persecuted and targeted due to their political position and activism in the country.

Bahrain Interfaith alarmed the attendees of the dilemma of the revocation of nationalities, the challenges faced by Bahraini refugees including lacking access to safe countries, and delays in their asylum applications in certain countries, in addition to the growing fear of Bahraini refugees being harassed and extradited to Bahrain, despite the fact that some of them obtained asylum or sought asylum in safe countries that are signatories to the International Refugee Convention.

(BI) presented recommendations to States participating at the forum that focused on tacking the challenges faced by Bahraini refugees, especially citizens whose nationalities were revoked, and stressed on the importance of urging the Government of Bahrain to take tangible steps in resolving the political crisis through sustainable solutions that guarantee human rights protection and provide security and safety to all citizens. Such steps will potentially decrease the numbers of Bahrainis seeking asylum in other countries.