Bahrain Interfaith: Sectarian Discrimination Against Worship Centers in Bahrain: More Than 700 Shia Worship Centers (Hussainiya) might shut down due to electricity bills 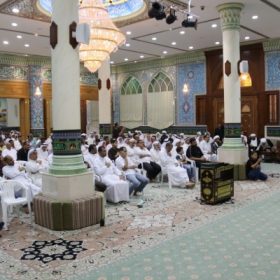 Bahrain Interfaith warns against the outrageous sectarian discrimination practiced against more than 700 Shia worship centers (Hussaynia) due to the governments decision to treat these centers as public facilities and commercial companies, and not places of worship.

Bahrain Interfaith considered that accumulating these ‘worship centers’ electricity bills, which are estimated at millions of dinars, is a violation of the constitution of Bahrain and the law issued by the Cabinet (Council of Ministers) in 2006, which exempts houses/places of worship from electricity and water bills. In light of the continued discrimination practiced against Shia “worship centers” and the lack of explicit official recognition of them as places of worship, Bahrain Interfaith sounds the alarm on this issue, especially that some of these worship places might close their doors due to the inability to pay accumulated bills.

The parliament, in a session held at the end of June of this year, approved a proposal to urgently treat Shia worship centers (Hussainiya) as places of worship and mosques, urging the government to settle the accumulated electricity bills.

Bahrain Interfaith expresses serious concerns on the exemption of Shia worship centers from being regarded as places of worship like mosques, churches, hindu temples, and other places of worship in which the government covers electricity and water costs. The Center denounces this unjustified discrimination and considers it another indication of systematic sectarian discrimination against Shiites, who represent a majority in Bahrain’s national religious demography.

Bahrain Interfaith calls on international organizations mandated to uphold promoting religious freedoms to urgently urge the Bahraini government to end this discriminatory policy that Shiites are exposed to on a large scale, since the events of February 14, 2011. Moreover, (BI) warns of the consequences of this policy in deepening the existing crisis in the country and causing more distrust among the components of society leading to consensus within the Shiite community that Shiites are treated abhorrently, as expressed by the US democratic Senator Chris Murphy during his visit to the home of the arrested activist Nabil Rajab in late November.

The Constitution of Bahrain treats Shia worship centers as places of worship. However, the government refrains from expressing this in the law, despite the efforts of successive administrations in the Jaafari Endowment to exempt these places from electricity fees as the rest of places of worship in the country, but these efforts did not progress towards a change in policy . Bahrain Interfaith considers this as a revelation of the government’s double standards policies, that advocate for tolerance and religious coexistence, and host international conferences and meetings to advocate for religious freedoms, the most recent of which is the regional meeting of the Roundtable on Religious Freedom (IRF). It is noteworthy that hosting this meeting urged the Center to raise questions, especially in light of the Bahraini government’s reluctance to respond to international human rights recommendations and obligations, including preventing religious and sectarian discrimination and the lack of action to ensure Shia citizens enjoy Equal Citizenship rights.