Commentary on the “International Religious Freedom Roundtable” in Bahrain: urgent need to stop discrimination against Shiites 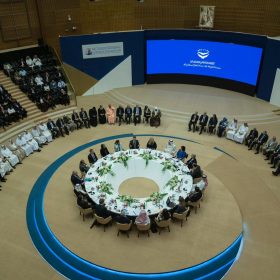 Bahrain Interfaith emphasizes that Bahrain is in dire need of fruitful collaboration with international bodies to stop the acts of religious persecution, human rights deprivation, and systematic discrimination practiced against religious components in the country. BI, believes that stoping religious discrimination will be the only indication of the government’s seriousness in promoting religious freedoms elsewhere.

On December 8 and 9, 2019, Bahrain will host the regional meeting of the International Religious Freedom (IRF) Roundtable in the Middle East and North Africa. BI called upon participants to urge the government of Bahrain to adopt international recommendations related to religious freedoms and human rights, enabling all Bahrainis to enjoy Equal Citizenship.

Bahrain Interfaith stresses that hosting these events must be accompanied by practical measures that prevent governmental bodies and other entities from committing sectarian-based discrimination and other discriminatory acts, including policies and procedures that deprive the country’s Shiite component of their natural right to fully enjoy full Equal Citizenry.

Furthermore, BI points out to the repeated international reports that illustrated Bahrain’s need for serious reforms to tackle the widespread of racial and religious discrimination practices, especially against Shiites in Bahrain, in a manner that prevents them of being treated as second-class citizens, including taking tangible steps in protecting Religous sites to avoid the repetition of demolishing Shiite mosques. Bahrain Interfaith stressed on the importance of responding to calls for dialogue and national reconciliation in the country.

Bahrain Interfaith believes that the political, human rights, and economic deterioration cannot be tackled in Bahrain unless the government stops its intransigent positions regarding the need to abide by the international human rights standards , and adapts a realistic approach towards the need for democratic reforms.