Christian Archaeological Finds in Samaheej: A History of Tolerance That Failed to Stand Up for Bahrainis 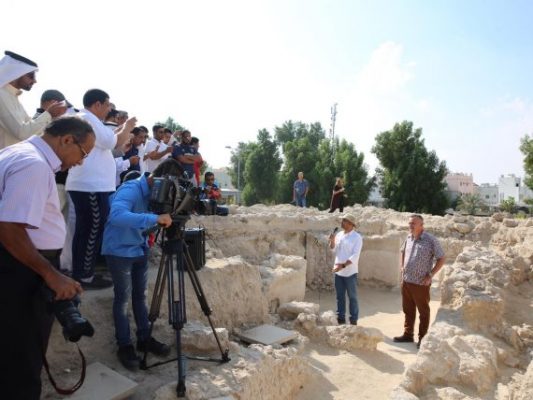 On the 28th of last November, the Bahrain Authority for Culture and Antiquities (BACA) announced the first archaeological evidence of a Christian community in Bahrain, specifically in the Samaheej area of ​​Muharraq Island. The archaeological find is a large 17-meter-long and 10-meter-wide building that might have been part of a monastery or a large house. This discovery was carried out by archaeologists working in cooperation with the local community.

To illustrate the importance of this archaeological discovery, Prof. Timothy Insul, of the team of archaeologists, said: “The discovery is one of the most important discoveries in the entire region.” Also, Dr. Salman Al Mahari, of the same team, said: “This archaeological discovery constitutes evidence of the period of Christian community presence on the Muharraq Island,” and he added: “History, region, and preliminary information, all indicate that there were Christians inhabitants before Islam was introduced to the island, but for the first time, and since the excavations began in the eighteenth century, we can prove this hypothesis.”

Based on the study of pottery discovered at the site, by Professor Robert Carter, it was found that it dates back to the seventh century. The building was probably occupied and inhabited in the 7th century before the people of this area converted to Islam. Professor Carter attributed the reason for the absence of evidence on the inhabitants of that site or their migrations from it, to their conversion to Islam, which indicates that a period of coexistence and tolerance had been prevailing.

Samaheej is definitely one of the oldest villages mentioned in historical sources; some of these sources demonstrate that it encompassed the entire Island of Muharraq, and prove that it was popular before Islam and inhabited by the tribe of Abdul Qais. Moreover, Samaheej is the area that historically bore the name of Bahrain, i.e., “Arados” and it witnessed many calamities, invasions, and ruthless historical conditions. Also, it was considered one of the most beautiful villages of the island and a Christian center in the region, before Islam.

Samaheej’s historical legacy has little archaeological remains; hence, the recent discovery might be the key to reaching some of the missing links in the history of this deep-rooted region. In this context, it may be a “historical oddity” that the people of Samaheej, today, are Shiite Muslims, however, this emphasizes the extent of tolerance among its indigenous people. The fact that the excavation site consists of a high hill located in the center of Samaheej Cemetery, surmounted by the remains of a small mosque known as the Sheikh Malik Mosque, and having a Christian building below are indications that those people have shown harmonious ties throughout history.

Although this religious history entailed values of tolerance and harmony, unfortunately, it did not play a role in protecting the people of Samaheej as they were subjected, just like the rest of Bahrain’s Shiite citizens, to a systematic, sectarian-oriented campaign, especially since the onset of the popular uprising in 2011, which witnessed at its peak, the demolition of various Shiite mosques, including the historic Al-Barbghi Mosque. Accordingly, it would seem difficult for some to understand the reason for the state’s inaction in presenting a model of religious tolerance for the Shiites, although, according to history and the results of past excavations, they were tolerant of other religions. This is not a matter of projects of a promotional nature, and the government knows, before others, that propaganda and celebrations can never consolidate brotherhood, tolerance and religious coexistence, unless effective policies, based on these values and meanings, are genuinely and effectively implemented.