BHRO: Bahraini people will not concede an inch of their legitimate mosques

Sheikh Maytham Al Salman, Head of Religious Freedom Unit in the Bahrain Human Rights Observatory denounced the statements made by the Undersecretary of the Ministry of Justice and Islamic Affairs on 9th June 2013, as containing clear fallacies regarding the demolishing of mosques. 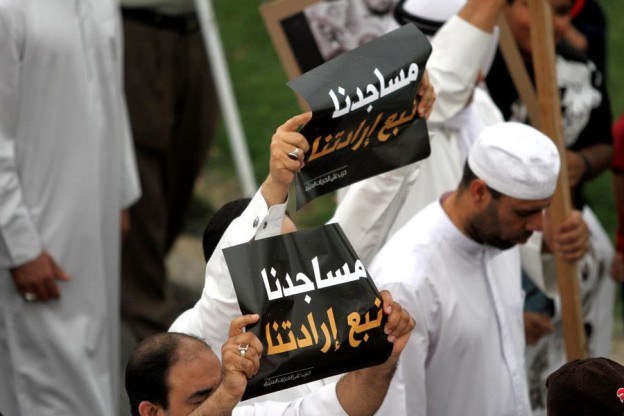 “The fake statements and public relations campaigns will not succeed in justifying the shame of the authority by demolishing 38 mosques during the state of emergency in 2011″, he said, ” the statements of the Undersecretary of the Ministry of Islamic Affairs illustrate his ministry’s insistence to mislead the public”.

The Undersecretary of the Ministry of Islamic Affairs, Fareed Al Miftah, made his statements during an inspection visit to the sites of some rebuilt mosques that were illegally demolished. The Undersecretary stated that work is in progress in follow-up to the recommendations of the Bahrain Independent Commission of Inquiry (BICI) to rebuild the “infringing sites” that were used for mosques. Al Salman said by this statement, the Undersecretary is denying legal facts that prove all the 38 mosques are registered in the Jaffaria Waqf Directorate.
Al Salman pointed out, “The Undersecretary has claimed there is a specified timeline to rebuild the demolished mosques as agreed upon with the Jaffaria Waqf Directorate. However, the Ministry of Islamic Affairs is refusing to reveal this timeline and the Directorate knows nothing of the plan”. He added, “Many local and international reports, including the report of the U.S Commission on International Religious Freedom highlighted the absence of a clear timeline to rebuild these demolished mosques”.
The Undersecretary of the Ministry of Islamic Affairs also claimed that the number of the demolished mosques is 28. This is despite the fact that all 38 are registered in official documents although the BICI couldn’t visit all 38 sites for logistical reasons.
Commenting on Al Miftah’s statement regarding illegal possessions of public and private land to be used for mosques, Al Salman said, “The Justice Ministry must hold accountable those mentioned in the State Property Report to have stolen lands.”
Al Miftah had also called on clerics to avoid sectarian hate speeches. On this, Al Salman commented, “Every person keen to protect this country welcomes the speech of unity and rejects violence and sectarianism that attacks tribunes calling for reform and which the Ministry of Justice and Islamic Affairs is ignoring”.