The NIHR celebrates its 10th anniversary: powerless performance despite the official propaganda 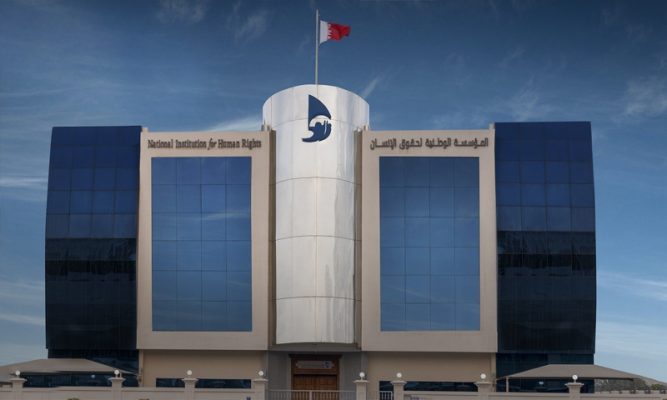 On Wednesday, the 27th of November 2019, the National Institution for Human Rights (NIHR), founded by a Royal Law, celebrated its 10th anniversary in Bahrain. On this occasion, in the presence of the Minister of Justice, senior officials, and members of the Shura and Representative Councils, the institute was keen on creating a festive atmosphere.

NIHR was formed pursuant to Law No. 26 of 2014, in the context of official attempts to respond to international human rights criticism accusing the government of human rights violations. Based on that Law, the NIHR has as objective to meet the “urgent” needs, to deal “responsibly with human rights violations” and to promote and protect human rights in Bahrain. It is clearly set forth in the Law that the NIHR operates “freely and independently”, and that it relies on (Paris principles), which are internationally recognized principles based on which local human rights institutions are formed in light of their defined mandates and procedures.

Since its formation, the NIHR has been a subject of wide debate in the local and international human rights community. A Bahraini human rights activist states that the government took the right path in forming this institution, in harmony with the demands of the International Covenant on Civil and Political Rights, following the government’s ratification. Although it is preferable to deal positively with the NIHR and its work, however, the “official justifications” behind its formation cannot be omitted, in particular, considering the suspicions and doubts of human rights defenders towards state institutions concerned with the human rights situation. Another human rights activist believes that the “ongoing governmental interferences in the mandate of NIHR reinforced these doubts, especially in terms of the institutes mandate in monitoring and receiving complaints from human rights victims”.

However, the government has failed in promoting the NIHR, despite the considerable efforts made in international.advocacy. The institution has only been granted a B, meaning that it is solely allowed to be an observer and not eligible to vote. Human rights groups in Bahrain consider the UN’s position as an “evidence of the institution’s failure to fully comply with the Paris Principles”. Bahraini human rights activists express a “strong” reservation towards NIHR, citing its negative performance in dealing with the ongoing human rights violations in Bahrain. Even more, an activist expressed dissatisfaction with the NIHR’s position claiming that the institute acts as a“false witness to whitewash the violations. The NIHR did not exert pressure or even attempt to mediate with the government to improve the human rights situation”. He added “the NIHR has concealed the scale of human rights violations in Bahrain, including reprisals against human rights activists and politicians, and defended governmental policies that violate international human rights standards.”

Furthermore the NIHR “questioned international and local human rights reports that focused on widespread violations in the country”.

Civil society activists pointed out that the NIHR “fails to demonstrate its independence from the executive body of the State, because its members are solely appointed by the state and they do not represent the political and social diversity of the Bahraini society”. These activists additionally questioned “NIHR’s lack of transparency at a financial and administrative level” noting that “NIHR discloses no information on its resources or funding”, which is inconsistent with the principle of “ensuring financial integrity” underlined by the UN High Commissioner for Human Rights. According to some resources, it appears that the NIHR benefits solely from “royal funding”.

An activist and a victim of torture reported the institution’s “malpractice” in the places of detention. She explained that the NIHR’s delegations conduct visits to prisons in coordination with the Police authorities, and added that “these delegations have failed to provide a safe atmosphere in interviewing torture victims in prisons, and deliberately published biased reports”.

Another human rights activist presented his vision on the work of NIHR by stating that NIHR can “convince the international community of its independence, if it undertakes real organizational reform and provides human rights victims with practical solutions and published unbiased reports ”. He further believes that the NIHR missed a “precious” opportunity to win the trust of citizens, human rights violations victims and their families in “promoting a culture of human rights and reconciliation”. He adds “As for its performance, the Institution has been converted into a propaganda pro-governmental institute, thus, it lacks the ability to create the required environment to address human rights violations in Bahrain, a failure that generates a new crisis”.