On the anniversary of the issuance of the BICI report, Bahraini organizations call on the government to launch a national reconciliation initiative.

On the eighth anniversary of the issuance of the Bahrain Independent Commission of Inquiry’s report “Bassiouni report,”

Bahraini organizations call on the government of Bahrain to launch a genuine and comprehensive national reconciliation initiative. 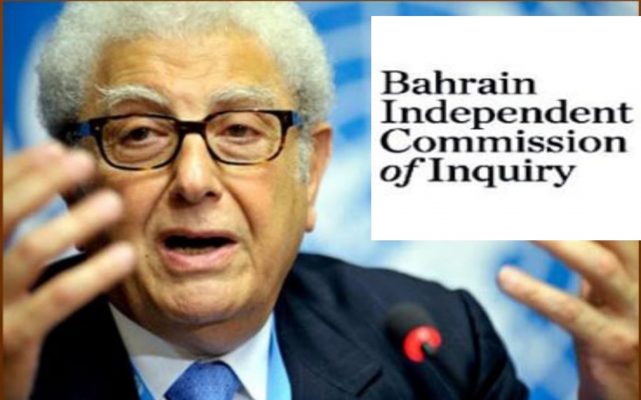 London, November 23, 2019: Today, November 23, marks the eighth anniversary of the release of the BICI report, known as the Bassiouni Report.

Although many local and international parties, with all their different political and rights-based aspects and interests, were counting on this government / UN report and its recommendations to play an active role in achieving national reconciliation, overcoming the political and security crisis and reducing human rights violations in the country, the authority is still evading the implementation of the report’s recommendations eight years after the issuance of the Bassiouni report. We recall here the statements of the Chairman of the Committee, Mr. Mahmoud Sharif Bassiouni, on May 10, 2016, that the government has implemented only 10 out of 26 recommendations, and didn’t deal well with reforms of priority, such as those related to accountability and prisoners of conscience; this is a reality that has not changed since the year 2016 till today.

The committee, composed of eminent international human rights experts, analyzed and verified various violations in Bahrain during 2011 and concluded its work with recommendations to the government on how to prevent such incidents and address their consequences and repercussions. The committee delivered a final report on November 23, 2011, to King Hamad bin Isa Al Khalifa. The report identified 26 recommendations to the Bahraini Government, which aimed at meaningful reforms to end continued systematic violations.

Furthermore, we at Bahrain Interfaith, the Bahrain Press Association and the Bahrain Center for Human Rights, urge the Government of Bahrain to adopt the option of dialogue in order to achieve comprehensive national reconciliation and fix the current crisis, and to commit to the recommendations adopted in the report; in particular Recommendation No. 1725-b, which states the importance of “ the development of a national reconciliation program that addresses the grievances of groups which are, or perceive themselves to be, deprived of equal political, social and economic rights and benefits across all segments of Bahrain‘s population.”

Moreover, we emphasize the need for serious government’s actions regarding the media incitement issues, as the Committee made the following recommendations (recommendation 1724):

In light of the importance of the Bassiouni report and its recommendations, and in order to reach a solution to the crisis in Bahrain, we at Bahrain Interfaith, Bahrain Press Association, and Bahrain Center for Human Rights emphasize the following: