The Head of Religious Freedom Unit in Bahrain Human Rights Observatory (“BHRO”), Sheikh Maytham Al Salman, submitted a report on violations of religious freedom in Bahrain to the Special Rapporteur on freedom of religion or belief, Prof. Heiner Bielefeldt in the United Nations Human Rights Council. 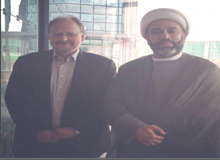 Al Salman outlined the dangerous consequences of re-demolishing Abu Talib mosque in Hamad Town in Bahrain, in addition to the attempts to transfer two other mosques to a remote area pursuant to official instructions.

Al Salman pointed out during the meeting that the authority is stalling and has not yet lived up to its pledges made before the international community to rebuild 38 mosques it had illegally demolished.

He also urged the Special Rapporteur on freedom of religion or belief to visit Bahrain on a fact finding mission to look into four main issues related to religious freedom in Bahrain:

1. The authority’s commitment to rebuilding 38 mosques illegally demolished in what the Bahrain Independent Commission of Inquiry considered a collective punishment against a certain sect.

2. The GoB’s adoption of a sectarian policy against citizens in terms of rights and duties, as successive international reports have confirmed that official units in general, and more specifically the ministries of Interior, Justice and Information are dominated by this sectarian policy.

3. The ongoing systematic violations of religious freedom by targeting the rituals and figures of a wide faction of citizens.

4. The incitement of sectarian hatred and religious contempt by the official media which damaged the national and social fabric.

Mr. Heiner Bielefeldt said he will make a visit request to Bahrain for the nearest opportunity. He mentioned that he is following the events in Bahrain, especially the developments in the demolished mosques issue.

Prof. Heiner Bielefeldt expressed his appreciation to the Bahrain Observatory for sending updated reports on violations of human rights and religious freedom.