Articles, The centre in the Media

The Universal significance of Ashura 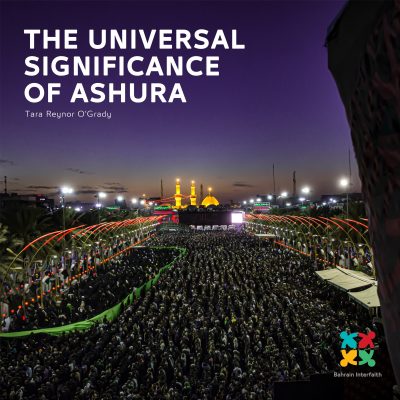 Tara Reynor O’Grady presents this exclusive article to the Bahrain Interfaith Center. She is an Irish Human Rights Defender and Social Media Activist that has been advocating for the promotion of universal human rights in Bahrain since the arrest of the medics in 2011.
O’Grady talked about her journey to reach Imam Hussein, after extensive research in different religions. She said: “I was immersed in a multi cultured religiosity that was so contrary to my Irish experience that I had to significantly expand my beliefs on the HOW to embrace an active relationship with God and the diversity of multiple faiths. I met, befriended and sometimes attended church with Mormons, Baptists, Evangelicals, Seventh Day Adventists, Spiritualists, American Indians, Humanists, Agnostics, Atheists, Jews, Muslims or those who believe in reincarnation, resurrection, universal energy or the great void. I listened to them all respectfully and was glad for them, for their faith and their commitment to it. But they could not adequately captivate my attention and did not influence the path of my devotion”.

However, she added “the more I learned of Imam Hussein, and the events of Ashura, the more I was convicted that my path would lead me to Karbala”

O’Grady also spoke of a part of her life that was a major influence for her embracing people’s concerns and entering the world of defending rights that were violated. She had a bitter childhood experience of daily sectarianism and abuse in school and her neighborhood. This might be the core reason for being influenced by the integrity of Imam Hussein as “the absolute clarification of honor and sacrifice for freedom and dignity”.

For her, all the other ‘human rights’ rise from the freedom of religion, “because our faith informs our sense of justice and our desire for freedom”. “This is a direct order to foster harmony, it is not a call to revolution, but rather a demand for universal social action” she said.

Her conclusion, reached after in-depth research, is that Hussein’s message was and still is a reason to promote harmony, not a call for revolution, but a demand for global social action to be compassionate to others, and have the courage to not be silent in the face of cruelty or abuse, either against ourselves or others.