Research, The centre in the Media

The role of inequalities in the crisis in Bahrain 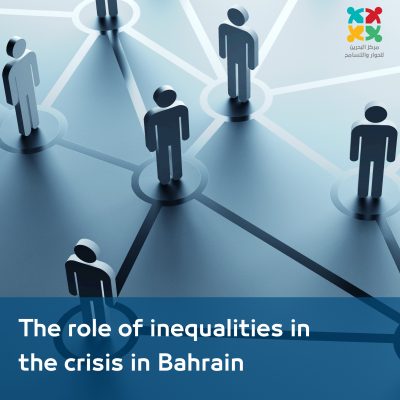 Bahrain Interfaith issued a research paper discussing the role of inequality in the crisis in Bahrain. The paper includes the legislative texts in the Constitution of Bahrain that guarantee the right of having social, political and economic equality. In addition, being a member of the International convention on the Elimination of All Forms of Racial Discrimination obliges Bahrain to abide by the contents of these laws and conventions.
The paper also discussed inequality in Bahrain and how it relates to the current crisis. All was linked to Nicholas Sambanis’ theory of the relationship between wealth and civil unrest, and to Paul Collier’s theory, Ankh Hoefler’s as well as Frances Stewart’s theory.

The paper concluded that the closest theory to explaining the relationship between the crisis in Bahrain and inequality is Frances Stewart’s theory. All the levels of inequalities he has mentioned, especially political and social inequalities, play a major role in the crisis in Bahrain. Although economic inequality is a player in conflict, it is inaccurate to regard it as the only driver to unrest and frustration amongst a large population of citizens. In addition, the Sunni minority holds a disproportionate share of political power and benefits more than the Shia majority and considers these inequalities to be a key driver of the civil unrest.