Events, Statements, The centre in the Media

Discussion of launching the project “Charter of equal citizenship in Bahrain” 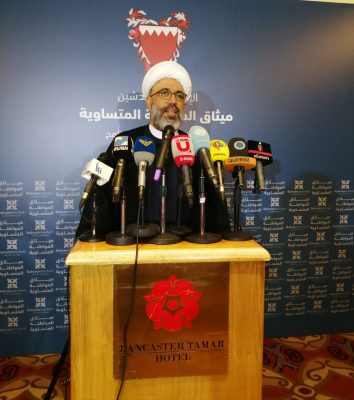 At the same time when the Government of Bahrain’s inauguration of the National Plan for the Promotion of National Belonging and Consolidation of Citizenship Values took place, Bahrain Interfaith held a press conference in Beirut to discuss it through an analytical reading prepared by the center.

In the center’s press release, the president of Bahrain Interfaith, Sheikh Maytham Al-Salman, highlighted and analyzed the main points discussed in the National Plan. After eight years of political, humanitarian and societal crisis in Bahrain, erosion of freedoms, total absence of the value ​​of equal citizenship, domination of the language of discrimination and class and the persistence of hate speech and rejection of the other, international calls and urgent local demands to build an equal citizenship state and adopt the language of dialogue and the integration of all components of the Bahraini society in addition to the attempts aiming to stop all projects of marginalization, discrimination, segregation and targeting did not stop.

The National Committee for the Promotion of National Belonging and Preservation of National Identity was formed in December 2018; some details were announced in March 2019 and details of this plan were presented in August 2019.

Al-Salman also assured that the announcement of the details was a great shock to the local and international community regarding the issue of equal citizenship, their denial of the crisis and their insistence on the language of marginalization and suppression of freedoms. The initiatives and actions included in the plan were either sarcastic, marginal or did not reflect the reality of the problem.

He added that the initiatives were overshadowed by the lack of seriousness in dealing with reality and the intentional omission of the truth in order to dismiss the real problems. The plan did not touch the essence of the problem, but the ideas put forward will contribute to further constraints and measures that will increase authoritarianism, spread fear and remove stability.

The magnitude of the problem in Bahrain has gone too far that citizens are feeling the absence of the state, independent authorities, real institutions or/and a fair law that can lift grievances of citizens. The governing body has no other choice but to return to the State and to the independent authorities and influential institutions which can guarantee a society of equal rights and duties.

In a speech, Sheikh Maytham Al-Salman said that Bahrain today is one of the worst countries in the world in terms of violating the foundations of citizenship since there are a lot of atrocities on so many levels that some of them reach the total obliteration of a huge part of the citizen’s necessary elements for living.

He adds: “We at Bahrain Interfaith call on all parties, communities, political and academic institutions, including the official institution, to work jointly on the preparation of the Charter for Equal Citizenship.”

“In the coming period, we will work on the preparation of this charter by communicating with all parties to come up with a national and objective vision.
This charter shall constitute a professional reference and a balanced ground based on everything related to equal-citizenship building while relying on international references and the basis of equal citizenship as mentioned in different international experiences and values”.

In parallel with the conference, a detailed report was issued about the analytical reading of the plan, which also included a summary of the plan. In addition, the report discussed Bahrain’s international and national commitments and stressed on the problematic content in the Bahraini Government’s plan and what concepts have been manipulated through the predominance of national belonging on equal citizenship.

The report also pointed out that initiatives are weak or sometimes even lost by the Bahraini government through most of its ministries.