Bahrain Religious Freedom Unit, Events, The centre in the Media 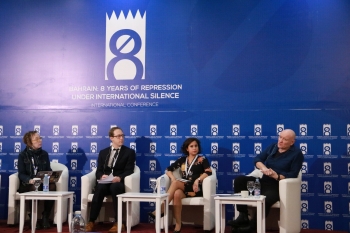 After the eight-year anniversary of the start of mass democratic protests that took place on the 14th of February 2011, when tens and thousands of Bahrainis peacefully protested and called for reforms, “Bahrain Center for Human Rights”, with the cooperation of “Bahrain Interfaith”, organized an International Conference. Its goal was to discuss the necessary steps to put a stop to the deterioration of the human rights situation in Bahrain. The conference “Bahrain: 8 years of Repression Under International Silence” shed light on the repressive methods used by the Bahraini government since 2011, which focus on crushing civil society and dissent by arresting activists and human rights defenders, issuing death sentences and dissolving civil and political associations.

Saloua Boukaouit moderated the first panel that discussed the situation of “Human Rights Defenders in Bahrain” and the panelists were Khalid Ibrahim (Director of the GCHR), Ahmed AlWedaei (Director of Advisory BIRD), Mohamad Najem (Co-founder of SMEX), and Kristina Stockwood (Advisory Board GCHR). Additionally, in the second panel, the moderator Annie Game (IFEX Director) discussed the “International Perspectives towards Human Rights violations in Bahrain” with Aya Majzoub (Researcher at HRW), Brian Dooley (Senior Advisor Human Rights First), and Devin Kenny (Researcher at Amnesty). In the third panel which were entitled “Civic and political space in Bahrain”, the panelists were Fadi Al-Qadi (Independent),Drewery Dyke (Salam Director), and Joe Stork (Independent), while Ariel Plotkin moderated the discussion.

The conference issued recommendations after discussions in the form of round tables. There was a call on international diplomatic missions for observing the trials of political activists, human rights defenders and freedom of expression, as well as reporting on due-process violations; that was in addition to verify the status of the detainees of opinion and work to convince the king to end violations and activate the role of the parliaments of the European Union, the United States and Britain.

Among the recommendations were to make use of influential international media and inviting special rapporteurs on torture to visit Bahrain and link it to the obligations of the Committee Against Torture (CAT). Scoping missions to assess which countries/businesses/organizations have most leverage on Bahrain was added to recommendations. The conference also recommended that attention must be paid in the Arab media to the issues of detainees, not just the prominent ones, and to launching a campaign ahead the Formula1 race.

The conference included a video for Nabeel Rajab’s daughter saying: “Instead of honoring my father for his human rights activism in my country he has been subjected in inhumane conditions and ill-treatment in prison. I hope the entire world calls for Nabeel Rajab’s immediate release and for the Bahraini authorities to drop the charges against him.”