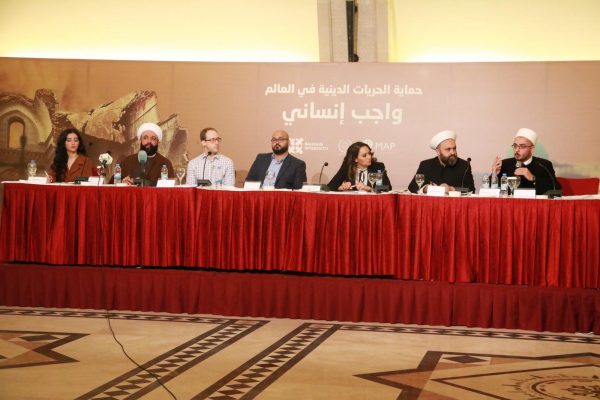 Bahrain Interfaith (BI) and Bahrain Center for Human Rights (BCHR), in cooperation with Media Association for Peace (MAP), organized a conference entitled ” Protection of Religious Freedoms: A Human Duty “. The conference was organized in light of the deterioration witnessed by Bahrain in religious freedoms, in conjunction with the National Day of Religious Freedom in Bahrain and the commemoration of the demolition of the mosque Mohammed al-Barbighi. Religious scholars from various communities and international human rights organizations, including Amnesty International, Maharat Foundation, and a number of activists and researchers have participated.

The conference was held in Beirut, on the 17th of April 2019. It focused on religious pluralism, civil coexistence among the different, religious diversity in Bahrain and the persecution of Shiites, as well as an assessment of the conditions of religious freedom in Bahrain. The speakers were: Dr. Ghassan Abu Diab the member of Global Forum for Religions and Humanity (GFRH), Sheikh Souhaib Habli the member of Tajamoo of Muslim Scholars in Lebanon, Sheikh Maytham Al-Salman the President of Bahrain Interfaith, Vanessa Bassil the founder of Media Association for Peace,  Ghiwa Farroukh the researcher at Bahrain Center for Human Rights, and Hussein Al-Shareef member at Maharat Foundation, in addition to Amnesty International’s Gulf researcher Devin Kenny.
The Center called again at the conference to make the 17th of April a National Day for religious freedom in Bahrain. That helps to find a new reality based on respect and appreciation for the beliefs of citizens, and the creation of a legislation deterrent to infringement or tampering with those beliefs.

The most important statements in the conference were:
Abu Diab stated that “If we want to extract from the holy gospel or the Qur’an the theology of war we can, and if we want to extract the theology of peace we can also”. Sheikh Habli commented that “if Bahrain permits Buddhists for example to practice their religious rituals while do not permit Shiites… the problem then is political and has nothing to do with the doctrines and their differences”.  Hussein Al-Shareef spoke of a report issued by Maharat Foundation in 2018 entitled “”Hate speech on social media”. The report concluded that there is no conflict between the sects. Rather, the difference is political and this is what the media contributes to.  About Shiites in Bahrain, Kenny said “it is an issue of demanding democracy, and the violation is a violation of the same religion. The authorities prohibit the practice of religion in prisons. We as an organization do not follow the religious discourse, but call for equality at all levels”. At the end, sheikh al-Salman commented that “making the 17th of April a National day for Religious Freedoms in Bahrainis a reaffirmation of the need of Bahrain to protect the religious freedoms of all components and communities and provide legislative and legal immunity to all places of worship”.

The conference issued recommendations after discussions:
Allowing the visit of the Special Rapporteur on Religious Freedom of the United Nations to Bahrain to examine the deterioration of the religious freedoms of citizens; The formation of an international team of United Nations experts and specialists in the crimes of demolition and erasure of cultural, heritage and religious landmarks to study the crime of the demolition of 38 mosques in Bahrain; To put pressure on the Bahraini government to enact laws protecting religious freedoms, as well as to address the effects of the political crisis in Bahrain and to open the doors of serious dialogue leading to comprehensive national reconciliation; In addition to many other recommendations that were signed by the attendees so to be presented to the United Nations later on.
The conference also included a musical part presented by Israa Koueik and a painting by the artist Hassan Qambar.